← more from
Heavenly Recordings
Get fresh music recommendations delivered to your inbox every Friday.

How Long Does It Take? 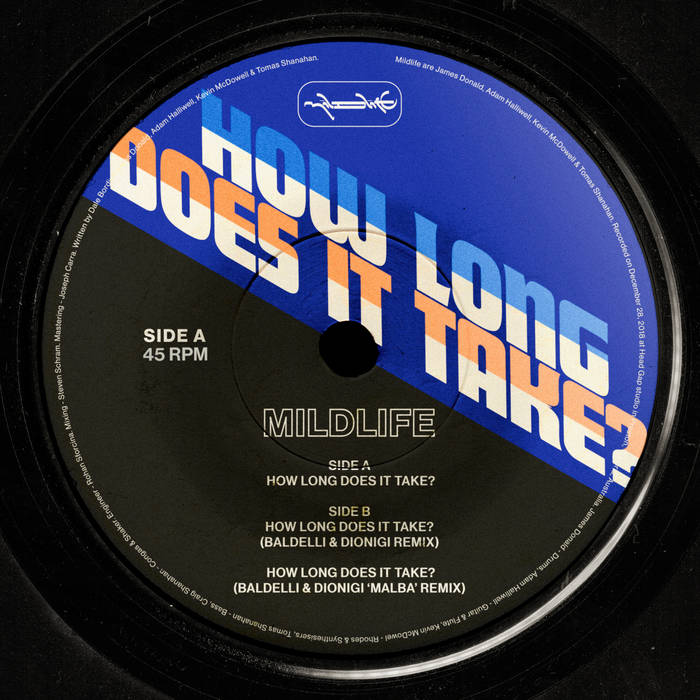 Adrian Furby It's a great great track - how it builds, the polyrhythms, the performance - sublime! Favorite track: How Long Does It Take?.

Rand Robertson This bassist is the BEES KNEES!

Mildlife return with a brand new 12" Single entitled How Long Does It Take? The track will come as a welcome surprise to die-hard fans, as it has been used as the high energy closer for the band’s live shows over the past year.

How Long? is a pulsing dark-matter-powered locomotive plowing through the upper atmosphere. In it’s early moments, Rhodes and flute paint an optimistic horizon of glistening stars that transforms into pulsating bass, drum & vocal groove as tight as the vacuum of space. As the train pushes beyond the atmosphere, its structure & sonic makeup transforms and adapts ensuring momentum is never lost. In it’s closing moments you wave goodbye as it ventures far beyond the horizon wondering if one day it will return to near earth orbit.

The B-side of the 12" comes with not one, but two remixes direct from the originator of Cosmic Disco Daniele Baldelli and his partner in crime Marco Dionigi. The band met Baldelli on tour in Sicily where they had been invited by Giles Peterson to play at his Ricci Weekender on the outskirts of Catania. They bonded over a mutual sound and Baldelli jumped at the opportunity to remix the song. The first remix twists a song already primed for the dance floor and pushes into the territory of a late night burner, Whereas the Malba mix transports the listener straight back to the middle of the Cosmic Club dance floor in 1979.

FROM THE BAND
“The song is a homage to the dance floors and clubbers who championed our music from day 1. We’ve been delighted to watch heaving crowds burn holes in the dance floor as we close our set with it so now we’re equally delighted to offer it up on record as a late night thumper.”